Christ did not enter into a sanctuary made by hands but heaven itself, that he might now appear before God on our behalf.  Not that he might offer himself repeatedly, as the high priest enters each year into the sanctuary with blood that is not his own; if that were so, he would have had to suffer repeatedly from the foundation of the world.  But now once for all he has appeared at the end of the ages to take away sin by his sacrifice.

Just as it is appointed that human beings die once, and after this the judgment, so also Christ, offered once to take away the sins of many, will appear a second time, not to take away sin but to bring salvation to those who eagerly await him. 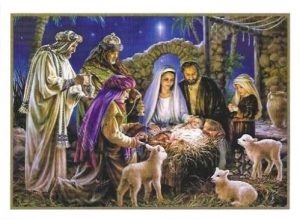 You and those you enroll will be included in the 3 Christmas Novenas of Masses celebrated during the Christmas Season. (Christmas Day, Feast of Mary - Mother of God and Feast of Epiphany)

The Vincentians of Our Lady of Angels Association offer twelve annual Novenas of Masses. The next Novena of Masses, Miraculous Medal begins on November 19th. Please send your intentions and we will remember them in these Masses.

Do you not know that the runners in the stadium all run in the race, but only one wins the prize?  Run so as to win.  Every athlete exercises discipline in every way.  They do it to win a perishable crown, but we an imperishable one.  Thus I do not run aimlessly; I do not fight as if I were shadowboxing.  No I drive my body and train it, for fear that, after having preached to others, I myself should be disqualified.

Truly we are consumed by your anger, filled with terror by your wrath. You have kept our faults before you, our hidden sins exposed to your sight. Our life ebbs away under your wrath; our years end like a sigh. Seventy is the sum of our years, or eighty, if we are strong; Most of them are sorrow and toil; they pass quickly, we are all but gone. Who comprehends your terrible anger? Your wrath matches the fear it inspires.

Grant me justice, Lord! I have walked without blame. In the Lord I have trusted; I have not faltered. Test me, Lord, and try me; search my heart and mind. Your love is before my eyes; I walk guided by your faithfulness. Do not take me away with sinners, nor my life with the violent. Their hands carry out their schemes; their right hands are full of bribes. But I walk without blame; redeem me, be gracious to me! My foot stands on level ground; in assemblies I will bless the Lord.

Hear my voice, Lord, when I call; have mercy on me and answer me. “Come,” says my heart, “seek God’s face;” your face, Lord, do I seek. Do not hide your face from me; do not repel your servant in anger. You are my help; do not cast me off; do not forsake me, God my Savior! Even if my father and mother forsake me, the Lord will take me in.

Lord, how long will you look on? save me from roaring beasts, my precious life from lions! Then I will thank you in the great assembly; I will praise you before the mighty throng. Do not let lying foes smirk at me, my undeserved enemies wink knowingly. You see this, Lord; do not be silent; Lord, do not withdraw from me. Awake, be vigilant in my defense, in my cause, my God and my Lord. Defend me because you are just, Lord; my God, do not let them gloat over me. Put to shame and confound all who relish my misfortune. Cloth with shame and disgrace those who lord it over me.

Now this is the message that we have heard from him and proclaim to you: God is light, and in him there is no darkness at all.  If we say, “We have fellowship with him,” while we continue to walk in darkness, we lie and do not act in truth.  But if we walk in the light as he is in the light, then we have fellowship with one another, and the blood of his Son Jesus cleanses us from all sin.

Not to us, Lord, not to us but to your name give glory because of your faithfulness and love. Why should the nations say, “Where is their God?” Our God is in heaven; whatever God wills is done. Their idols are silver and gold, the work of human hands. They have mouths but do not speak, eyes but do not see. They have ears but do not hear, noses but do not smell. They have hands but do not feel, feet but do not walk, and no sound rises from their throats. Their makers shall be like them, all who trust in them.