History of Our Lady of Angels Association 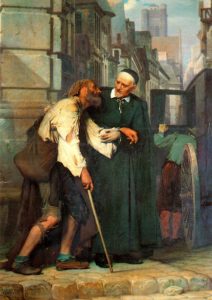 Inspired by the charism of St. Vincent de Paul, Rev. Martin J. Blake, C.M. (1881-1939) founded Our Lady of Angels Novenas in April of 1918.  Father Blake was the Director of Seminarians at the Seminary of Our Lady of Angels and Vice-President of Niagara University.

The purpose of the Novenas was to honor the Mother of God and to spread devotion to her under the title of Our Lady of Angels, the Patroness of the Seminary and University.  It was Father Blake’s hope to have Mary better known and loved, and to inform people of her great intercessory power, and to inspire in them confidence in the Mother of God.

In early April 1918, Father Blake sent a letter to the families and friends of the priests, seminarians, and other university students asking them to contribute “to the fund we are raising to meet our mortgage and for the rebuilding of our chapel and laboratories which were destroyed by a fire a few years ago, and which we sadly need at present.”

In return for their offerings, Father Blake assured the donors of a remembrance in a Novena of Masses to be offered for their intentions.  The first Mass of this initial Novena was offered on April 17, 1918.

During the early days of the Novena Office, a great deal of material assistance was given to the University: rebuilding the Seminary/University’s chapel which was dedicated on October 20, 1921; building the residence for the Vincentian community teaching at the University and Seminary, dedicated on March 25, 1927; building a dormitory; a new addition to the Seminary building; a new heating system and fireproof stairs were completed in all the buildings, and many other improvements to the grounds.  In 1950 funds from the Novena Office helped to build a recreation center with a basketball court, food court and offices.

By the early 1950’s, the Novena Office which had been dedicated in 1926, had outlived its usefulness.  There was a need for a more specious and modern office.  The old office building was razed, and ground for the new building was broken on November 27, 1956.  On May 13, 1957, the corner stone was set in place.  A life-size statue of the Blessed Mother, made of carrara marble, was placed over the entrance of the building on October 29, 1957.  The Marian House was completed by November of 1957.

Toward the end of August, 2002, the President of Niagara University asked that Our Lady of Angels Association relocate since the University had need for the Association’s Office.  After a search for a new office space, a property was located about three miles from the University in the village of Lewiston (NY).  After negotiations with and approval of the town zoning board, the University rented the building for the Association.  After some necessary remodeling, moving of equipment, stock, etc. was begun on January 20th, 2003.  The staff moved in on February 3, 2003.

As we celebrate the 100th Anniversary of the Association, it continues to be faithful to the purposes expressed in its Mission Statement –

Our Lady of Angels is a Development Office for the Eastern Province of the Congregation of the Mission.  The Association promotes love for and devotion to Our Lady of Angels.  Inspired by the spirit of St. Vincent de Paul, the Association also encourages its members and benefactors to support, through their prayers and donations, the education and formation of Vincentian priests, brothers and seminarians; and it encourages them to be partners with the members of the Vincentian Family in their ministries with and for the poor.

May God, through the intercession of Our Lady of Angels, continue to bless the works of the Association and its members and benefactors.

The Vincentians of Our Lady of Angels Association offer twelve annual Novenas of Masses. The next Novena of Masses, Our Lady of Sorrows, begins on September 7th. Please send your intentions and we will remember them in these Masses.

My children, I am writing this to you so that you may not commit sin.  But if anyone does sin, we have an Advocate with the Father, Jesus Christ the righteous one.  He is expiation for our sins and not for our sins only but for those of the whole world.

Oppose, Lord, those who oppose me; war upon those who make war upon me. Take up the shield and buckler; rise up in my defense. Brandish lance and battle-ax against my pursuers. Say to my heart, “I am your salvation.” Let those who seek my life be put to shame and disgrace. Let those who plot against me be turned back and confounded. Make them like chaff before the wind, with the angel of the Lord driving them on. Make their way slippery and dark, with the angel of the Lord pursing them.

My heart is steadfast, God; my heart is steadfast. I will sing and chant praise. Awake, my soul; awake, lyre and harp! I will wake the dawn. I will praise you among the peoples, Lord; I will chant your praise among the nations. For your love towers to the heavens; your faithfulness, to the skies. Appear on high over the heavens, God; may your glory appear above all the earth. Help with your right hand and answer us that your loved ones may escape.

Now if you invoke as Father him who judges impartially according to each one’s works, conduct yourselves with reverence during the time of your sojourning, realizing that you were ransomed from your futile conduct, handed on by your ancestors, not with perishable things like silver or gold but by with the precious blood of Christ as of a spotless unblemished lamb.

I look to the faithful of the land; they alone can be my companions. Those who follow the way of integrity, they alone can enter my service. No one who practices deceit can hold a post in my court. No one who speaks falsely can be among my advisors. Each morning I clear the wicked from the land, and rid the Lord’s city of all evildoers.

How long, Lord? Will you utterly forget me? How long will you hide your face from me? How long must I carry sorrow in my soul, grief in my heart day after day? How long will my enemy triumph over me? Look upon me, answer me, Lord, my God! Give light to my eyes lest I sleep in death, Lest my enemy say, “I have prevailed, lest my foes rejoice at my downfall.” I trust in your faithfulness. Grant my heart joy in your help, that I may sing of the Lord, That I may sing of the Lord, “How good our God has been to me.”

Lord, you have been our refuge through all generations. Before the mountains were born, the earth and the world brought forth, from eternity to eternity you are God. A thousand years in your eyes are merely a yesterday. But humans you return to dust, saying, “Return, you mortals!” Before a watch passes in the night, you have brought them to their end; They disappear like sleep at dawn; they are like grass that dies. It sprouts green in the morning; by evening it is dry and withered.

Lord, hear my prayer; in your faithfulness listen to my pleading; answer me in your justice. Do not enter into judgment with your servant; before you no living being can be just. The enemy has pursued me; they have crushed my life to the ground. They have left me in darkness like those long dead. My spirit is faint within me; my heart is dismayed. I remember the days of old; I ponder all your deeds; the works of your hands I recall. I stretch out my hands to you; I thirst for you like a parched land.