In the days when he was in the flesh, he offered prayers and supplications with loud cries and tears to the one who was able to save him from death, and he was heard because of his reverence.  Son though he was, he learned obedience from what he suffered; and when he was made perfect, he became the source of eternal salvation for all who obey him, declared by God high priest according to the order of Melchizedek

Triduum of Masses for Healing 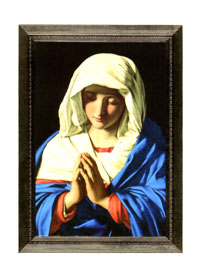 Because we believe that Jesus is always present with us in the Sacrament and Sacrifice of the Mass, I will be celebrating a Triduum of Masses on July 17th, 18th, and 19th, asking the Lord to bring His peace and healing to all those who are in need of any kind of healing.
Click on the link to list the names of those you wish to enroll in these Masses, and if you are able, please consider sending an offering to help support the ministries of the Association, especially those ministries assisting the poor.

The Vincentians of Our Lady of Angels Association offer twelve annual Novenas of Masses. The next Novena of Masses, Immaculate Heart of Mary begins on June 1st. Please send your intentions and we will remember them in these Masses.

I hate every hypocrite; your teaching I love. You are my refuge and shield; in your word I hope. Depart from me, you wicked, that I may observe the commands of my God. Sustain me by your promise that I may live; do not disappoint me in my hope. Strengthen me that I may be safe, ever to contemplate your laws. You reject all who stray from your laws, for vain is their deceit. Like dross you regard all the wicked on earth; therefore I love your decrees. My flesh shudders with dread of you; I hold your edicts in awe.

Come, children, listen to me; I will teach you the fear of the Lord. Who among you loves life, takes delight in prosperous days? Keep your tongue from evil, your lips from speaking lies. Turn from evil and do good; seek peace and pursue it. The Lord has eyes for the just and ears for their cry. The Lord’s face is against evildoers to wipe out their memory from the earth.

Do not speak evil of one another, brothers.  Whoever speaks evil of a brother or judges his brother speaks evil of the law and judges the law.  If you judge the law, you are not a doer of the law but a judge.  There is one lawgiver and judge who is able to save or to destroy.  Who then are you to judge your neighbor?

As the heavens tower over the earth, so God’s love towers over the faithful. As far as the east is from the west, so far have our sins been removed from us. As a father has compassion on his children, so the Lord has compassion on the faithful. For he knows how we are formed, remembers that we are dust. Our days are like the grass; like flowers of the field we blossom. The wind sweeps over us and we are gone; our place knows us no more.

Be kind to your servant that I may live, that I may keep your word. Open my eyes to see clearly the wonders of your teachings. I am a sojourner in the land; do not hide your commands from me. At all times my soul is stirred with longing for your edicts. With a curse you rebuke the proud who stray from your commands. Free me from disgrace and contempt, for I observe your decrees. Though princes meet and talk against me, your servant studies your laws. Your decrees are my delight; they are my counselors.

The end of all things is at hand.  Therefore, be serious and sober for prayers.  Above all, let your love for one another be intense, because love covers a multitude of sins. Be hospitable to one another without complaining.  As each one has received a gift, use it to serve one another as good stewards of God’s varied grace.  Whoever preaches, let it be with the words of God; whoever serves, let it be with the strength that God supplies, so that in all things God may be glorified through Jesus Christ, to whom belong glory and dominion forever and ever.  Amen.

To you I raise my eyes, to you enthroned in heaven. Yes, like the eyes of a servant on the hand of his master, like the eyes of a maid on the hand of her mistress, so our eyes are on the Lord our God, till we are shown favor. Show us favor, Lord, show us favor, for we have our fill of contempt. We have our fill of insult from the insolent, of disdain from the arrogant.